From Tecate to the end point of the first section, Ojos Negros it took us 3 days.

The first day on the dirt (although a good portion of the time riding was spent getting out of Tecate on the pavement, and we left late too) was quite hard as I started to cycle off-road.

With still quite a bit of light left we settled near the trail after some time cycling on the dirt. It was a sandy and windy night as strong gusts whistled against the tent fabric and send loads of sand all over the place.

The next day saw a more flowing ride and very nice scenery once we had reached a plateau. It certainly was not without a few challenges though. We had a quieter camp in a forest.

Then, the third day we hammered it downhill (or almost) to Ojos Negros, except for a bumpy ride into town on a washboarded road. 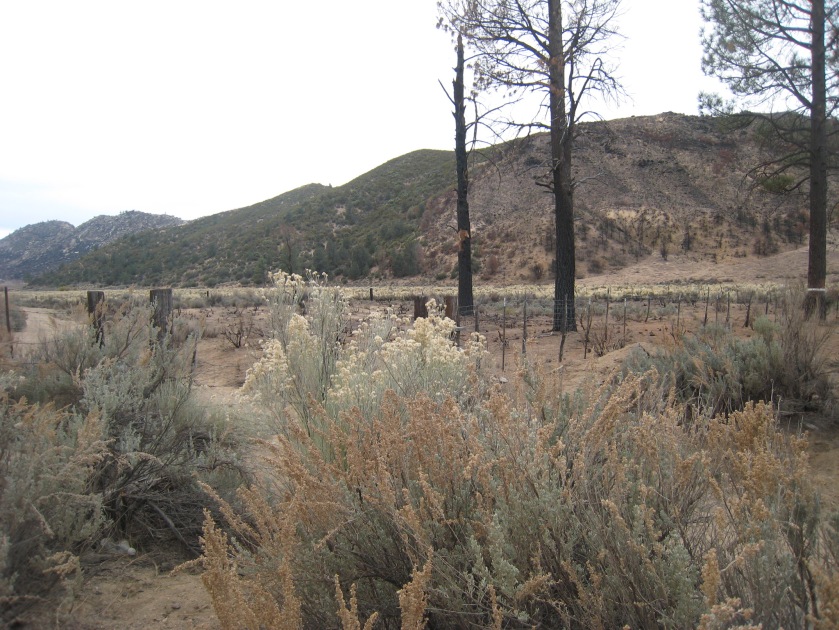 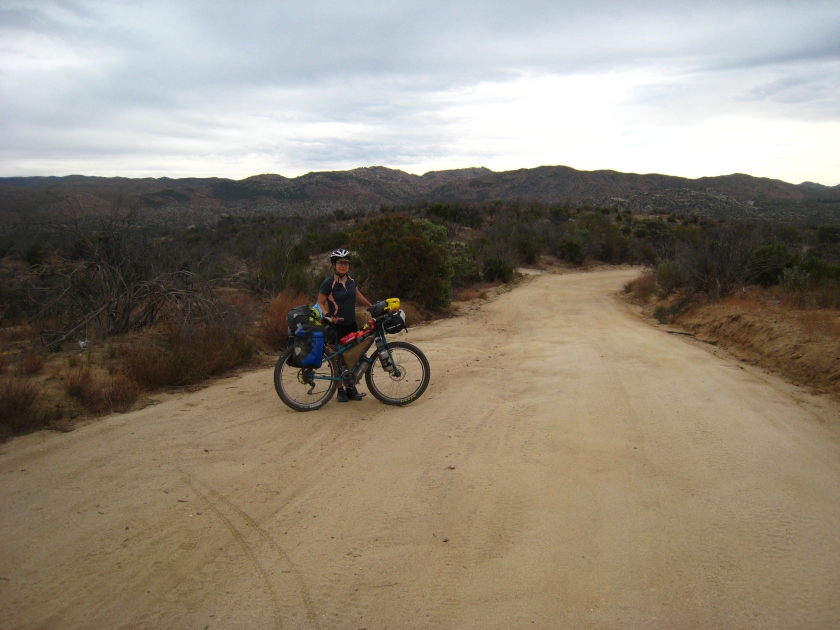 Ojos Negros is a small settlement with a few shops. We stayed at a nice campground for a rest day and tried out the Internet cafe (the connection being very slow, neither of us managed to do much, though).

Almost all roads onto Ojos Negros were dirt roads- which meant everything was dusty. Loads of dogs and kids roamed around the place. Most of the small towns encountered afterwards shared the dusty, dogs and kids characteristics. Dogs and kids mainly friendly, though! I had a try at babbling in spanish whith a few children. So far teenage boys are the most curious.

Going out of Ojos Negros on the 4th day riding we crossed Ross, a Brit who did the Continental Divide in the US and going the other way on some sections of the Baja Divide. We had an inspiring chat with him before each went on their own way, but not before eyeing up his gear. So far everyone we have met has an ultralight setup, and without surprise we are the most loaded as each of us is planning more touring after the trail.

After racking up some miles on the dirt, we found a really nice camp spot in the middle of the desert, amongst rocks and under an almost full moon. 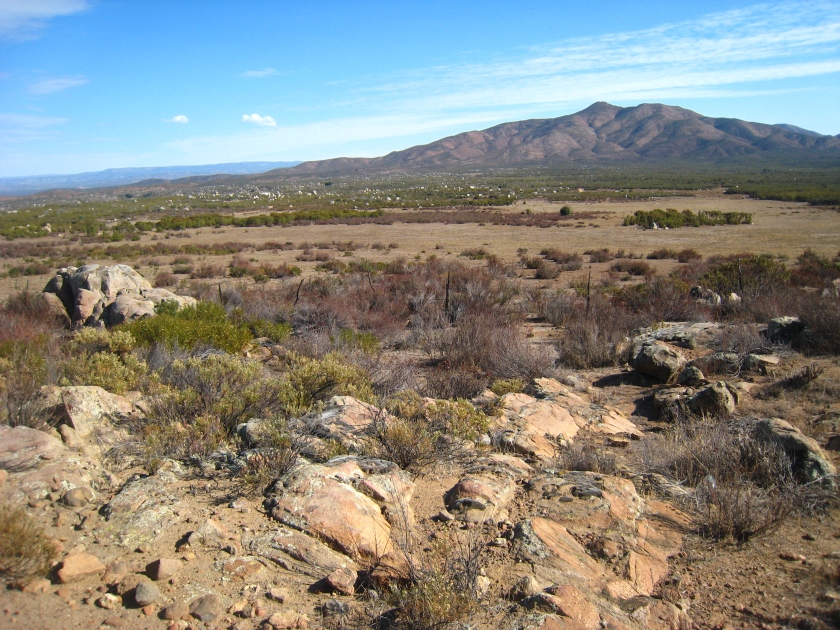 The 5th day was a hard day for me as there was no chance to warm up before attacking some steep uphills with some sandy and technicals sections thrown in between.

We arrived in Santos Tomas, the next end of section town, quite late and set up at the campground there. We weren’t really impressed by the price and the facilities- double than Ojos Negros’ at 100 pesos per person per night and some stagnant water in tanks to wash ourselves, but no running water or lights and it was difficult communicating with the owners who also held a shop where they sold everything triple the price of what we had seen so far. The following morning we did manage to stock up on food and everything else in an abbarotes (grocery store) in town where prices were much more reasonable.

We had a harsh climb out of Santos Tomas, then some much more flat and compact dirt until we approached the coast.

Just before our first view of the Pacific coast in Mexico we met another bikepacker Lukas, from Alaska, on an ultralight setup as well. We would follow his fat tyres tracks for the following few days.

After a picturesque and more rocky ride next to the ocean we ended up near Erendira that day, a fishing town, in the dark. 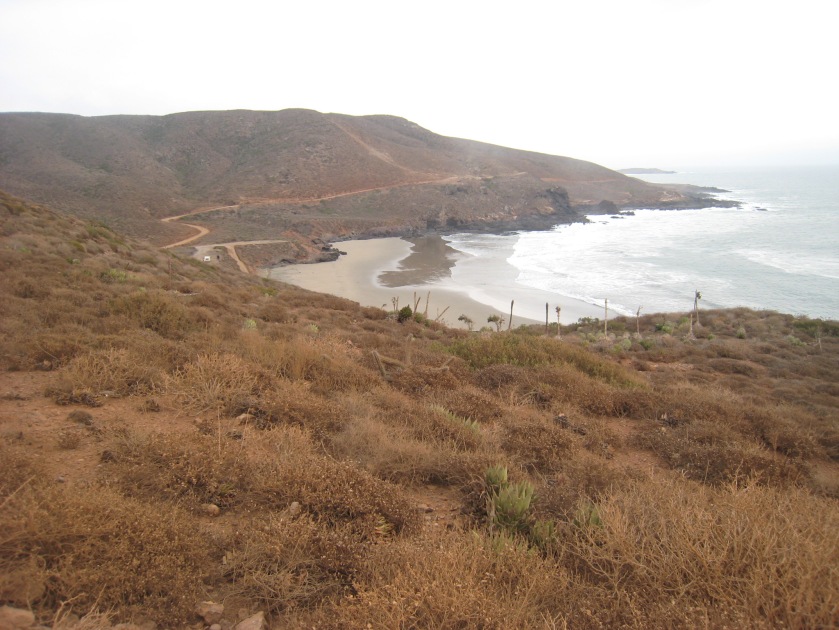 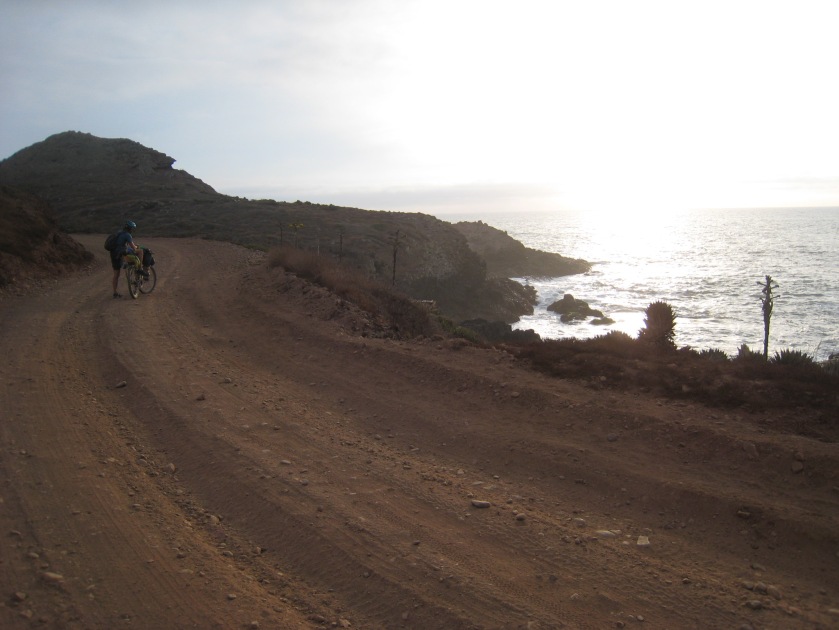 We expected to find a campground in Erendira but there was no clear signs towards it and locals seemed confused at to where the different lodging options including the campground and a hostel were. The following morning we ended up finding out we weren’t yet in Erendira, as we thought we were, but in a smaller close little fishing village. Luckily a nice lady let us crash and pitch our tent next to the lodging facilities for fishermen she was running. It was a strange and beautiful place to wake up in. 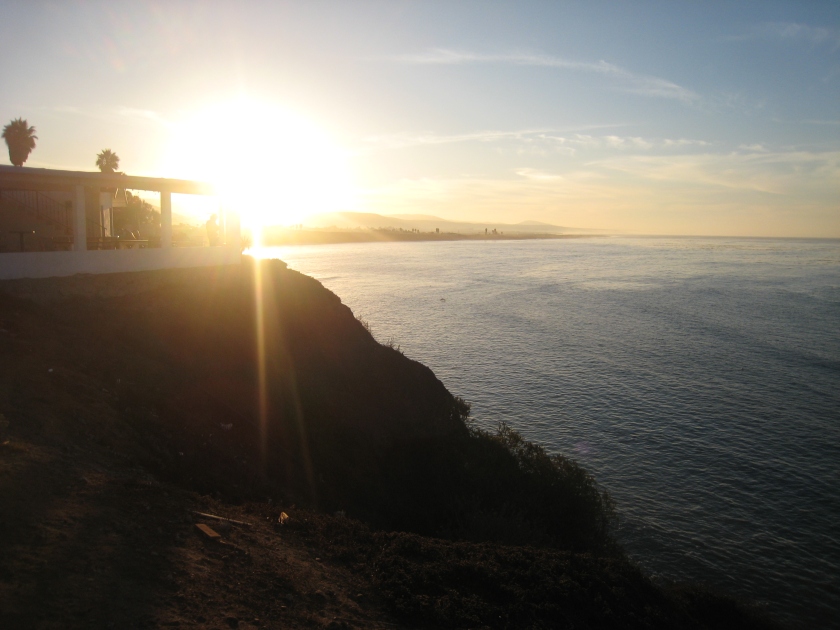 We headed for Colonet (third section resupply town) the next day but got distracted by a few things: a new fence which diverted us on the beach for a few dozen meters to get back on the trail after a chat with a local resident from the US, some volcanic rocks, some more cactus flowers and so on. 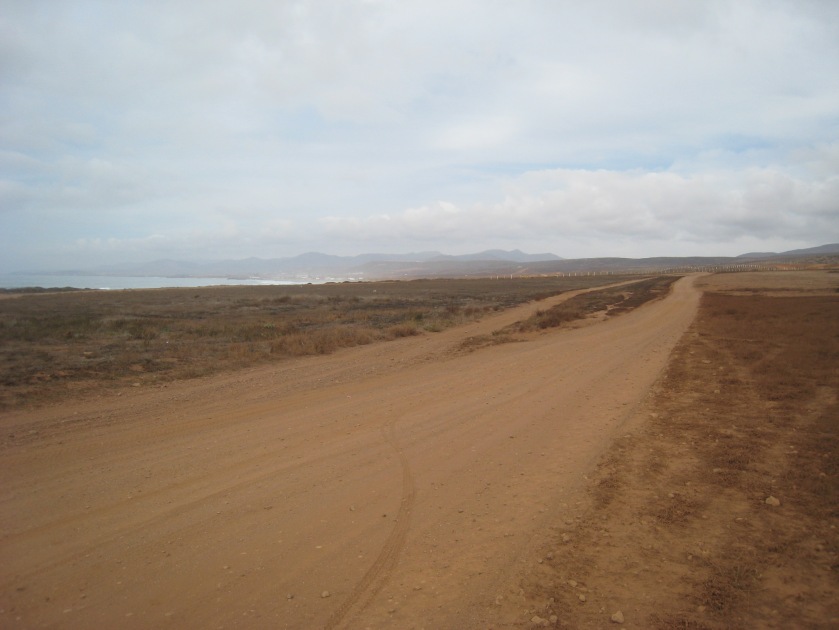 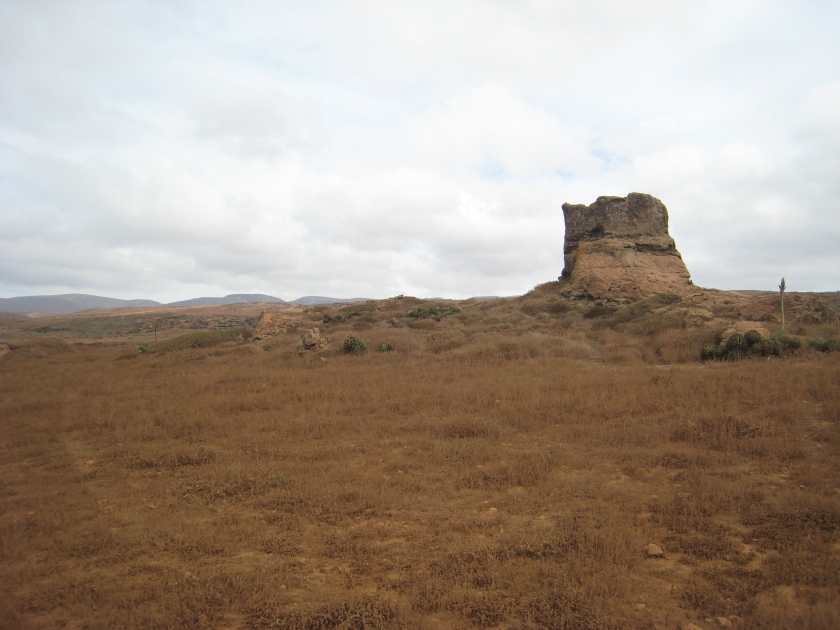 We slept in the desert amongst cactuses and cows before arriving in town the next day.

I was hoping to find a cheap accommodation to rest for a day then but that was not to be! After stocking up we passed a small settlement and camped shortly after, waking up to some frozen water bottles…

The following day saw us racking up some miles and cycling past dark some technical sections to get to El Coyote, a ranch where we camped 2 nights to get a bit of rest. I don’t have many pictures of the technical bits though, as it was quite hard riding and we rushed to make it to the ranch after dark… El Coyote was remote and its surroundings had a nice atmosphere, even though I am not a big fan of ranches due to animal agriculture. At around 900m high up there was a lot of wind there and it was quite chilly during the day and cold in the evenings again because of it. 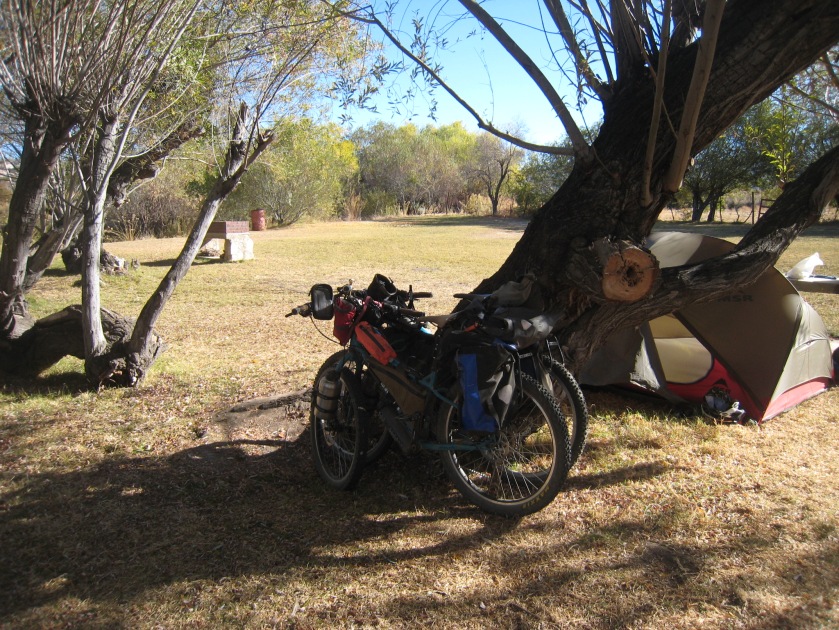 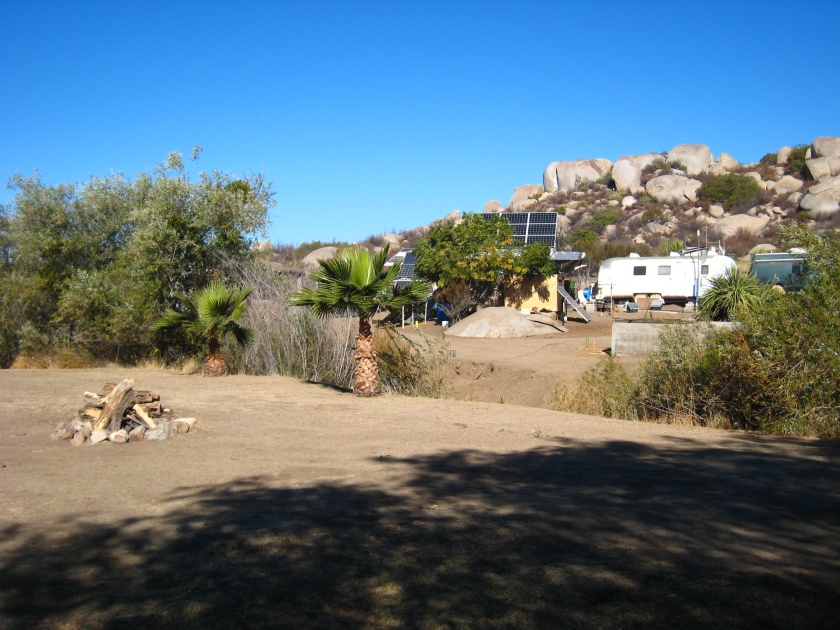 After the rest day we took the (dirt) road again to El Meling, another ranch 10 km down owned by the same family. The founder was the daughter of Norwegian and Danish immigrants and her story, in a piece of newspaper pinned down inside where we had a drink, was interesting to learn about. A lots of Mexicans, and possibly especially here in Baja, have a very mixed ancestry. We also had some puppy cuddling and playing time as they had lots of dogs on both ranches. 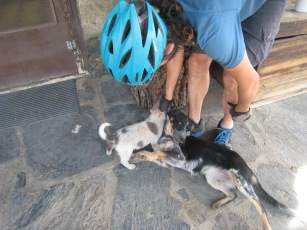 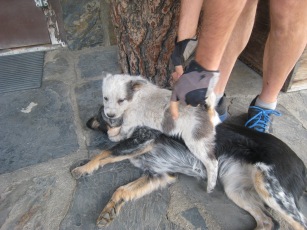 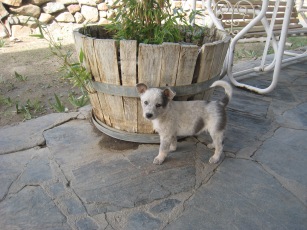 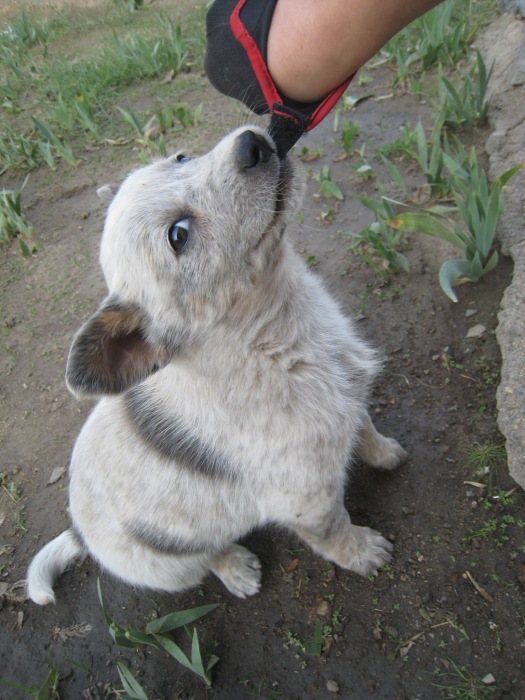 Cyclists mitts are my favourite…

I must add than so far all official campgrounds we stayed in had dogs around, some pets of the owners, some just hanging around for scraps of foods, cuddles, and the occasionnal peeing on the tent…

After El Meling we had more strenuous sections waiting for us that day, with a lot of pushing until it started levelling up again, but by the time we were starting to ride faster it was time to find a camp.

We ended up in a spot with… ocean views, a fairly warm weather all night, data access… and a huge tarantula ! Followed some intense research on the net on my side to try establish the venimosity of the animal. Fortunately, it seem they are fairly benign and the specimen we encountered was quite slow and seemingly uninterested in coming near any dirty cyclists.

We made it to Vicente Guerrero the following day, after nice views again and some bumpy downhills sections. We went to visit the famous local bike shop (Fass Bike) and signed a Baja Map already filled with a lot of riders signatures before heading out to a RV park where the kind owner, Richard, helped us on our rest day. We woke up in the sun to find out friends in London and South East England had been snowed in…

Before getting moving again onwards…

So far riding has been quite challenging espcially for me but manageable in terms of getting to resupply towns. Landscapes have been fantastic and it’s an incredible experience out there. I do find it a bit hard to tuck in in the tent for an early night as by 5pm the sun is down and we generally aim for an early camp and an early-ish start, and after riding, pitching the tent and cooking there is not much energy left for reading or writing on my side. I’ll get used to it, though.

Set on seeing a piece of the Americas while travelling mainly on my touring bike, I am interested in environmental issues & a vegan and it’s an important part of how I will travel. I hope to exchange with a lot of people and help with various projects.

I am nuts about rock-climbing too, and would love to connect with fellow climbers along my route.