Leaving Vancouver I cycled to Horseshoe Bay again where I followed the Sea to Sky highway. Brendan had warned me that it could get quite busy and the noise of the cars could be quite overwhelming. I played music on my phone, but unfortunately without earbuds it was completely covered by the noise. At last I was excited to get to Squamish at the end of the day- which had been in my mind for a while.

A few kilometers from downtown the majestic Chief appeared. It is a granite dome well known for trad climbing from far away.

I was staying in Squamish for 3 weeks, and hoped to climb as much as possible. I was initially thinking I’d wildcamp a lot and cycle to the crags with my loaded bike during the day, but just after arriving in town it started raining a lot and I was pretty run down with a cold for a few days as well. I went to the Chief’s Campground, 10 CAD a night, no showers but running water and nice campspots in the forest, fairly close to town and crags as well. I ended up staying there mainly, as it turns out it is very practical to socialize and meet climbing partners, and I was able to leave my tent and some stuff behind which meant I didn’t have to drag it to the crag where I also had to find a place to stash and lock my bicycle. There is quite a lot of bike theft in Squamish area, mainly very high-end mountain bike though but I often didn’t trust the bike parking area by the crags and generally tried to bring the bike as far up the access trail as I could. While I was there, funnily enough the Chief campground was mainly French-speaking as most climbers were quebecois. Apparently there are seasons for climbers of different provinces in Canada and international climbers and June is quebecois season ! I did meet and climb with climbers of a lot of differents nationalities too.

I also stayed at Chek campground which is free, 30 sites, 25km out of town, no services, toilets but no drinking water (I did refill some of my bottles at Brohm Lake nearby and filtered it afterwards). It is a great campground too in a nice setting and close to a lot of sport-climbing. While I was there some people had their gear stolen at the base of a multi-pitch though so care is advised if you are staying there. On weekends it was getting quite busy and once arriving on a Saturday night all spots were taken.

It was interesting to see that at both campgrounds a lot of climbers had been quite creative in transforming their vans so they could sleep/cook/use the space as inventively as they could. I also saw another cyclist climbing there, who had a bicycle with a front electric wheel for the hills, recharged through solar panels on a trailer where he was also storing his climbing gear inside !

Now, time for some rock-climbing and climbing pictures:

First, I went top-roping on some trad lines some of the quebecois climbers had led at the Smoke Bluffs.

I then followed Karl and Vincent to the Smoke Bluffs again, where I climbed in between them a trad multipitch, the Smoke Bluffs connection. I didn’t manage the last pitch unfortunately, but enjoyed the great view !

I then climbed with two climbers I had connected through Facebook at Murrin Park. A great crag with both sport and trad, by a lake. David led trad pitches while Melanie and I seconded.

I also seconded  Hairpin, a 5.10a 5 pitches multipitch, led by Joey, from New Zealand, on the Papoose next to Shannon Falls- a really great route where I had to exert myself quite a bit, but it was pleasant and I was really happy to make it to the top. Great view again! At Cheakamus canyon, I led some sport single pitches and also led a part of a short sport multi for the first time, before Guillermo and I went on Star Chek above the river, a little bit further north along the highway. We had to wait for some people to rappel down first, and by the time we were on it it was drizzling, which was making leading on the slippery arete a bit scary!

Apart from climbing I also the occasion to enjoy some other outdoors activities in and around Squamish. I swam a couple of times at Brohm Lake, 10 km south of Chek.

I also quickly sampled some MTB trails near Alice Lake with my unloaded bike when, just after arriving in Squamish, I stayed at a Warmshowers host in Brackendale (just north of the town), Jake. Staying with him and his housemates gave me a great insight into Squamish’s community.

Another interesting biking endeavour with a good hike-a-bike potential is following the sea to sky trail near the highway north of Squamish. Once, going back to resupply in town after a few days at Chek I followed Maps.me suggestion who showed me an all downhill trail which I would join a few kilometers north of Chek. After some faffing around along the highway to find the start of the trail (it seems some lay-by sections along the highway have been recently blocked by a concrete barrier, as both the entrance of the trail and the access to Star Chek are not accessible from the highway as they seem on maps and Maps.me), I ended up finding a gap in the barrier before joining the trail.

It certainly was not meant to be a hike-a-bike: fairly wide singletrack to doubletrack with amazing views above the canyon, and pretty much all downhill apart for a couple very short steep sections up. 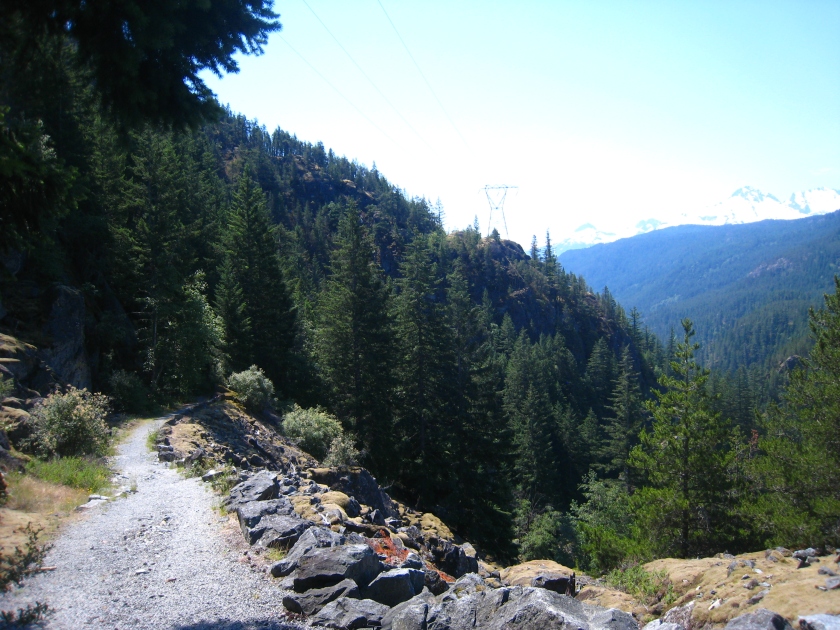 Only, when the trail crosses the railway, the north side is OK to cross but from there the south side is blocked by an imposing row of rocks. Which led to having to unload the bike, carry it/drag it across the rocks and reloading it on the other side. Exhausted, I didn’t think about taking a picture! After that the trail is fairly easy again until it lead to the Paradise Valley road just above Brackendale. A nice place to see some butterflies…

… and a young snake.

While in Squamish I also hiked the Chief, with the trail using ropes, chains, and roots to get to the top…

And here’s another squirrel.

Stopping for a while in Squamish was also the occasion to replace some worn-out gear, getting a new drivetrain on my bicycle installed as well as getting the rims and the front hub replaced after some problems with them. I got the work done at Republic Bicycles, which had been recommended to me by several cyclists in Vancouver area. I hope to post a gear blog soon, as in nearly 7 months of travelling so far I have had the chance to seriously test out some of my kit.

And, although I had heard some groans while camping several times, and after much fretting about what I would do should I come face to face with one, I only saw my first black bear after almost 2 months in Canada. The bike in the repair shop, I was riding the bus into town near bushy areas when what seemed like a cub or a teenage bear hurtled accross the road. He/she had a very black fur and a white snout which surprised me.

I had a great time in Squamish, and although I regret not having had the occasion to boulder or do a route on the Chief I was happy with how much I had climbed, especially given how my experience with trad had always been very limited. The next step, hopefully on the next long rock-climbing stop-over sometimes on my journey, will be to actually learn to place trad gear.

But I was also happy to leave- Climbing with a lot of different climbing partners had reminded me of my vegan climbing friends in London, and stopping for a while somehow brought some mixed feelings and made me missing a real sense of community and close friends. Climbing gear sent ahead to a Warmshowers host in a town after some hills, getting back on the road in the direction of Youngstown was a welcome and redynamising change.

Set on seeing a piece of the Americas while travelling mainly on my touring bike, I am interested in environmental issues & a vegan and it’s an important part of how I will travel. I hope to exchange with a lot of people and help with various projects.

I am nuts about rock-climbing too, and would love to connect with fellow climbers along my route.